My, my, my! 2019 is blazing by too quickly! I can’t believe that spring will be here in less than three weeks!

According to the National Days calendar, tomorrow is Hinamatsuri (or Doll’s Day here in Japan, click to read more about this special day) and March 8 is International Woman’s Day. March is also Woman History Month. So to pay tribute to these special occasions, it’s an all-female band battle in this edition of Battle of the Songs.

END_OF_DOCUMENT_TOKEN_TO_BE_REPLACED 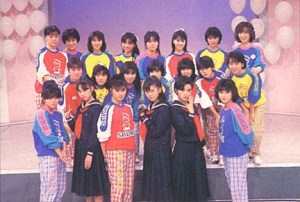 April is the month of new starts, warmer weather (although it raining here), and loads of beautiful cherry blossoms everywhere. it also marks a lot of anniversaries. One of these anniversaries is the 30th birthday of the idol group that started it all. No, not the Mickey Mouse Club, although this club might have got inspired by the MMC by having a large group, its own variety shows, subgroups, and lots of music produced. The club that I am speaking of is Onyanko Club!

Onyanko Club started on April 1, 1985 with eleven teenage girls who successfully passed audition based on singing, looks, and personality on a TV special sponsored by All Night Fuji (You can see one of these “audition” procedures on Youtube ). The girls appeared weekly on their variety show, named “Yuuyake Nyan Nyan”, on Fuji TV. However, two weeks after the debut episode premiered, a scandal broke out that resulted in the dismissal of half the group’s members. First appearing in the tabloid magazine “Shunkan Bunshun”, the scandal became huge news as six members committing a horrible crime in the idol law books; drinking and smoking underage. The girls were immediately fired and the producers of the show hired four more girls to cover the vacancies (Although, one of the suspects, Aki Kihara, was able to come back a few days later).

Trying to bounce back from the scandals, the group released their first single, “Sailor Fuku wo Nugasanaide”, on July 1985. The song became a memorable hit for the group, with many fans forgetting the scandal and remembering more of the words to the song.

For those who don’t speak Japanese, you probably wondering what does “Sailor Fuku wo Nugasanaide” mean. Simply, it means “Don’t Take Off My School Uniform”, sounds a bit perverted right? These perverted song titles and lyrics were written by Yasushi Akimoto. You probably have heard of him or his currently international sensation, AKB48 and the 48 family. Yep, he famous for his weird, sexual lyrics, as Western fans like to put it, even in AKB48 with songs like “Dear my teacher” and “Skirt, Hirari”. Although now, AKB48 doesn’t sing a lot sexual-based lyrics anymore as their latest hit, “Koisuru Fortune Cookie”, offers a kids-friendly, positive vibe about believing in yourself. Like AKB48, Akimoto had the same plans for Onyanko Club as the earlier singles (“Otto Chikan” and “Oyoshi ni Natte TEACHER”) had some of those bizarre scenarios while the later ones were pretty subtle.

Why does Akimoto write these awkward, perverted lyrics in his songs? That was the question that CNN International also had for when they interviewed him a couple of years ago, which you can watch it here (with English subtitles too!). His answer was that is expressing what all school girls fantasize and feel; foolish romance, thinking about their teachers, sex, boys, sex, their futures, their friendships, and, oh, did I mention about sex? Is that what Japanese schoolgirls think about all the time because I don’t remember thinking about some of those things mentioned a lot. Of course, I was thinking a lot of friendships, boys (Backstreet Boys <3), school, and my future. But, not about romancing with my teacher (ew) or sex… I wonder sometimes how exactly does Akimoto get his inspiration.

But back to the subject, Onyanko Club grew more and more as their popularity sky-rocketed. Before long, the group had around 40 members before the its disbanded in 1987. Also, members began to debut as solo artists and in various subgroups to promote the more popular members. The first member to make her solo debut was Sonoko Kawai with the single "Namida no Jasmine LOVE" in September 1985. The single broke the record for the youngest artist ever to have their single reached #1 on the weekly Oricon chart (it would be later been broken by another girl idol group member, Maki Goto, 16 years later).

What makes Onyanko Club so special? Well, it was one of the first major girl idol groups that had more than ten members. Most of the girl groups before Onyanko Club had less than five members with the most popular ones being duos (see Pink Lady and The Peanuts). With an array of different personalities, fans could relate to and/or pick their favorite(s) from the forty or so members. Want to be sexy? Then Shizuka Kudo is your girl. Love cute things? Yukiko Iwai is cute too!

The great thing about the massive membership is that the group didn't really focus on one or more girls for a long time. Sure, there was leads on the singles but they changed frequently as the lineups changed with members graduating and new people added in. And, at least girl got some sort of exposure, whether it was in singing, variety, acting, public relations, or just standing out on some street corner in Tokyo. People got to know each girl personally in a different way.

Onyanko Club would also served as a model for future girl groups in the future. Hate to say, Tsunku "stole" some pages from Akimoto's idol group cookbook to make Morning Musume. If you search "Onyanko Club vs. Morning Musume" on Google, there is a lot of fanpages that compare the two with eerily similarities; lineup changes, member graduating, auditions (well, Morning Musume does not do a bikini audition like Onyanko Club did, bummer..), subgroup, and even a roll call song. But, Akimoto would use the blueprints of Onyanko Club to form the 90's failures, I mean Chiecco, and the super successful group of the new millennium, AKB48. Other producers or companies would be influenced by Akimoto and model their idol groups like Onyanko.

Are these even remotely the same?

Whether or not you think Akimoto is a genius, one thing is true is how much of a mark he left with the idol music industry when he created Onyanko Club. Even though it's been twenty-eight years since Onyanko Club disbanded, the group is still alive today with former members still prominent in the entertainment industry, the memorable songs that are sung from time to time all over Japan, and how Akimoto created blueprints on how to run a successful but huge idol group. What are your memories or impressions of Onyanko Club?

Bonus Round: What is your favorite ……?

This is hard because there are so many good Onyanko Club songs! i think my number favorite is "Alelele", the b-side to the single "Jaa Ne". It's a fast pace and sort-of funky song that features of different vocalizations and a weird key and/or notes. I think the best part is how the guitar used as it races up the scale quickly like a race car. The girls also sound really good in the song with each girl fitting perfectly in their group sections. 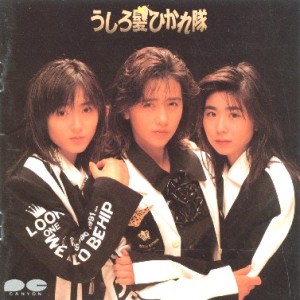 That would be Ushirogami Hikaretai! It had Shizuka Kudo, my favorite member Akiko Ikuina, and caterpillar eyebrows girl Makiko (I like her though). I feel like they were the “it” girls of the late 80s as they were cool, good-looking, talented, and powerful. They also had a lot of great songs from their singles and albums. Below is their most famous single, “Anata wo Shiritai”, but you check out their whole entire discography because it was A.MA.Z.ING!!! Like “Toki no Kawa wo Koete” amazing!

How about you? What is your favorite Onyanko Club song, member, and/or subgroup?

(P.S: I am really disappointed that I couldn’t see Sanae Jounouchi this weekend in Kofu, Yamamanashi Prefecture. 😦 I have yet to meet a former Onyanko Club member and that was my chance. Someday, I will!)