Aaaaaaaaaaaah, I am so behind on the Reporting Live segment! I keep on going to countless events but become lazy and not report on them! I am so sorry, I will try really hard to catch up before the end of March.

Sakura Cinderella is another “local idol” group here in Nagoya. Unlike Idol Kyoshitsu who performs in another company’s sushi restaurant,  these girls perform in their own cafe near Nagoya Station. Formed in 2014, this AKB48 copycat group performs in their cafe everyday and does street lives all over the city. Named after one of the main streets “Sakura Street”, Sakura Cinderella’s catchphrase is “Tidy and pretty true idols.”[1]

The group released their self-titled debut single a year later in May 2015. They will release their second one coming up this April.

I actually stumbled upon this event when I was out shopping with a friend around the central part of the city. We noticed that there was stage being set up and a handful of people were starting to gather around the area. I turned to my friend with eagerness in my eyes. I wanted to see this live because a) I didn’t know these girls and b) it was free! My friend rolled her eyes slightly and sighed as she didn’t want to join in. She went off and did more shopping as I stayed around for the live to start.

As it approached one o’clock, there were more and more people gathering around the stage. The main members of Sakura Cinderella (there were no “trainees” attending this event) came out and tested all the equipment and practiced a little. As they were practicing, I found a spot in the center-back. I had an ok view but there were a lot of tall people surrounding the stage.

The live promptly started at one. It was pretty long compared to other free mini-lives I been to. During the live, they sang about four to five songs, had a couple of MCs, and even did a photo session time (the only time where you can take a photo without the staff kicking you out from the event). I don’t remember what was the setlist or which members were on stage. And there isn’t information on the web about this event. However, it was pretty good live and the girls were really cute. They aren’t the best of singers but it was a lot better than Idol Kyoushitsu. No one was off tune, they blended together nicely, and they had a cute, good tone. 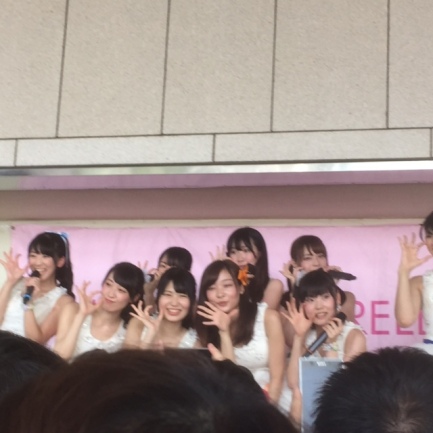 While waiting in line, I met a really kind elderly fan who chatted with me. Before we parted ways, he gave me his cheer light. At first, I tried to refuse it because it was a good-quality one with the group’s name written across on the upper section. But, he shrugged off my attempt to return it to him with a smile as he told me it was gift for coming and seeing the idol group. 🙂 ;_; 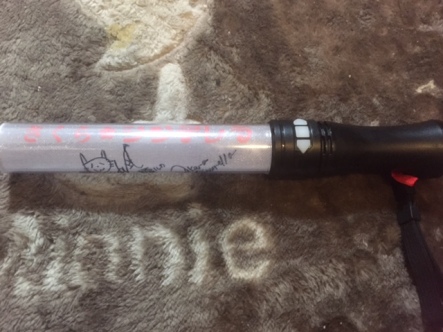 It didn’t take a long time to wait. As I approached each girl, I just said the normal “Hey, I enjoyed your live” and “It was my first live”. And in turn, they asked where I am from, how did I enjoy the concert, and such. I talked with each member for fifty to sixty seconds, I can’t remember. But, it was longer than most other idol group’s handshake events.

Sakura Cinderella is a cute group that have a really good tone and ear-pleasing voices. Sure, they and their music are AKB48 knockoffs. However, this is a pleasant group that I recommend seeing if you ever come to Nagoya.

Check out a live that did in September 2015:

(Also, you can check out their channel for more videos) 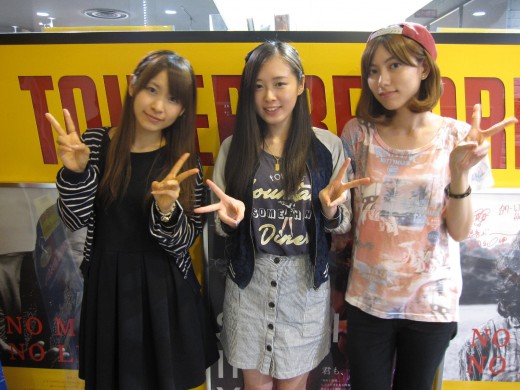 Yaaaaaaaaaaaaaaay, ☆ai love music☆ now has over 2,000 views for this year! I want to thank all those who have read and supported the blog! I really appreciate and love you guys! 😀 😀 ❤ ❤

Today’s Reporting Live is brought to you by the Japanese pop-rock band Chelsy. The group was founded in 2011 after vocalist and guitarist MIO, drummer AMI, and bassist SHIZUKA passed an audition hosted by Sony Music and Honey Bee Records. This audition was also supervised by YUI’s producer. The band started to perform all over Japan the following year, first under the name MIO band and then Chelsy. However, the band hit a snag when MIO announced retirement by the summer of 2012.

To fill in MIO’s position, the company hired keyboardist ARISA. However, she only stayed in the group for ten months as she left show business on May 2013. By that time, MIO had returned to the band as the lead vocalist and guitarist.

From their beginnings to early 2013, the band mostly performed at various types of events. They even hosted a free live concert to capture more fans. By the spring of 2013, Chelsy finally got to release their first CD, a single named “I’LL BE ON MY WAY”, that was only sold at Shibuya’s Tower Records for a limited time. It was later in the year that they released their major debut single, “I will/Animation”, under the label Being. “I will” was used as an insert song for the anime series AO–HARU–RIDE.

Chelsy arrived to Nagoya to promote their third single, “SistAr”, at Tower Records Nagoya Parco. After checking out the store’s site and the band’s Youtube channel, I decided to check them out after my part-time job on Saturdays. I thought, Hey, why not check them out? They seem cool! while watching the “SistAr” music video.

I got to the event space right as MIO started to strum the first notes for their opening song. I can’t find the setlist for that day anywhere online. However, they played a few songs and did a couple talks within a thirty minute period. The atmosphere at the live was pretty much chilled as MIO played and sang, SHIZUKA supported MIO with the bass, and AMI just drummed soothing beats with a cajón. The weather was also perfect that day, making the whole event splendid.

After the band performed their last song, MIO announced that they would be starting the meet and sign event soon for anyone who bought a CD. I quickly bought a CD and jumped into the queuing line.  It took only ten minutes to line everyone up and prepare for the event.

The meet and sign event was pretty relaxed. As I approached the table, I first talked to MIO, then AMI, and finally SHIZUKA. I just chatted with the girls about how I enjoyed their live, where I am from, and thanking them for coming to Nagoya. It ended with them singing the CD and shaking my hand. It sounded short but actually, I was able to talked to each girl for a minute or so. I just forgot all the little details of the conversations.

If you are into girl artists or bands like YUI, LoVendoЯ, or Scandal and/or you like pop-rock music, Chelsy is a band you must check out. Their song “SistAr” showcases MIO’s versatile vocals, SHIZUKA’s neat bass skills, and AMI’s on-point drumming. It is a song that is quiet mellow but upbeat at the same time, which will bring a jovial feeling to the listener’s state of mind.

Also, check out their super-cute announcement for Akihabara Expo 2015:

Make sure to check them out at Akihabara Expo 2015 this December in the Los Angeles area! 😀 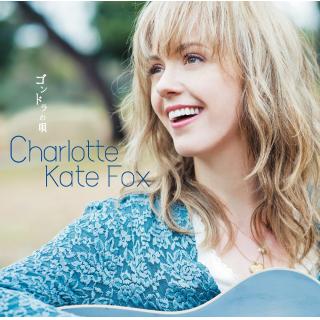 As I jolted down future events in my schedule book, I took a look at past events and realized that I forgot to cover one important event. This event was the promotion event for the newest NHK Asadora (translated as “morning drama”) heroine, Charlotte Kate Fox, and her debut single “Gondola no Uta”.

If you haven’t watched the NHK morning drama “Massan”, you probably haven’t heard of Charlotte Kate Fox. Let me give a quick rundown! Born in Santa Fe, New Mexico, the then-soon to be breakout star started as an actress when she was a teenager. She appeared in various small films and local theater productions until she landed the lead role, Ellie, in the Autumn 2014 drama Masan, a story about a young Scottish woman facing challenges and new adventures as she helps her Japanese husband establish a Whiskey company in 20th Century Japan. There is a wonderful interview on the website backstage about how she prepared for the role and got over her fears about it.

Charlotte Kate Fox quickly gained favorable reviews and popularity as “Masan” aired every morning. One of the fan favorite moments was when Ellie would sing the traditional Scottish folk song “Aung Lang Syne”. She was soon invited to perform at various music festivals and shows across Japan, even getting an invitation to appear on the prestigious end-of-the-year program “Kouhaku Utagassen”.

The actress made her major singing debut with the single “Gondola no Uta” in the spring of 2015. A soothing cover of a early 20th century Japanese folk song, “Gondola no Uta” is perfect for Fox. The actress-turned-singer has a beautiful range that is haunting, mystical, and marvelous. The best part is when Fox sings in the lower ranges as her tone is very warm and rich. Plus, the music video is pretty amazing with an interesting (and a teeny bit shocking) storyline.

To promote the single’s release, Charlotte Kate Fox embarked on a handshake tour all around Japan’s malls. She stopped at a mall near me in Aratamabashi, a name that is a mouthful! She only did handshakes and a quick chat this time, no mini-live before the handshakes which was a bummer because I would have enjoyed a mini-live by her. Oh well, she is going to have a concert tour this fall, maybe I will have a chance to see her if she comes to Nagoya.

After I finished my Saturday part-time job on that day, I rushed towards the mall first by bike and then by train. I was lucky as I barely made it to the three o’clock start time. i quickly bought a CD and then rushed to the handshake line. I probably had to wait about thirty minutes or so to shake her hands because there was a massive crowd. The crowd was full of people of different ages; college-students, kids, families, the elderly, and workers. Most were probably fans of Masan but supported her nevertheless.

As the line moved up, I pondered on what I should say to her. Should I speak in Japanese, a language that we both were accustomed to, or good old English? I chose the later because I wanted to stand out and be different then the other fans that were waiting in line. So, when I approached her, I said something like “I hope you enjoy New York City. Please enjoy New York pizza and cheesecake (because I miss it soooo much). Good luck!”, Her reaction was priceless! She was confused a bit when I said my message because everyone else was speaking in Japanese to her. Here comes this American girl speaking English, how confusing! Don’t worry, I feel that way sometimes too (when interchanging Japanese and English in a conversation)! After sporting the confused look, she quickly laughed it off and we joked about it as I had to say goodbye to her.

If you ever have a chance to meet Charlotte Kate Fox, you should most definitely pursue it because she is a complete doll and so sweet. And her music isn’t bad either, if you are into folk songs. If you don’t like folk songs, maybe you should her a chance and check out the video above. Or buy her new album, which comes out on August 18. 😀