So for this battle, I want to do a song that was performed by past Eurovision winner as you know Eurovision is next month! )If you haven’t read my series about this year’s entries, you can find in these parts: Part I, Part II, Part III, Part IV, Part V, and Part VI.) The song itself was never presented at Eurovision, but the group has. And, everybody knows this group as they are world famous. There have been a musical and two films that featured their songs.

Which group am I talking about?

END_OF_DOCUMENT_TOKEN_TO_BE_REPLACED

A lot has happened over the course of this past week. I know every week has their ups and downs. But, it feels like last week had more surprising downs than others. Especially yesterday.

To be honest, I don’t know much about AVICII’s songs. I am not much into EDM or today’s house songs, so his music would rarely appear on my Spotify recommended playlists. But, I have heard of him. I remember coming across his 2013 song ‘Wake Me Up” when I was watching a late night weekly countdown program in the summer of 2014. I liked the song’s style, a cross between country and EDM. It was a perfect blend as it wasn’t too country yet there wasn’t an excess of EDM-influenced keyboards.

It is unfortunate when young musicians like AVICII pass away too soon. He was a talented musician that knew how to make refreshing and innovated electronica tunes. But, he wasn’t just EDM or house. He was a musician that infused different genres together. House, funk, country, soul. You name the genre; he could create brilliant tunes with it.

His career may have been cut short suddenly, but his masterpieces and musicianship will be remembered for a long time. 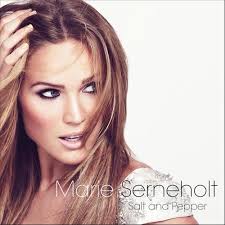 Did you know that food lyrics always spice up a song? The producers behind “Salt & Pepper” knew it when they helped Marie Serneholt to release it.

Many may recognize the name Marie Serneholt from her youthful days as a member of the Swedish band A*Teens. The group formed in 1998 with Serneholt and three other teens had hopes that they could be the new millennium’s ABBA. They started off by purely covering ABBA hits like “Mamma Mia”, “Gimme! Gimme! Gimme! (A Man After Midnight)”, and “Dancing Queen”. A*Teens didn’t start releasing original material until 2001 when they released the Gold-certified album “Teen Spirit”.

However, the group broke up in 2004 after their greatest album hit stores. The band slowly parted ways as each member wanted to pursue their own careers. Furthermore, their last original album, “New Arrivals”, had slow sales and promotions for it was cancelled as their label went bankrupt. This gave Serneholt a chance to take a break and enjoy a life she couldn’t have while in A*Teens.

The break didn’t last long as Serneholt began to appear as a model in various magazines and host various shows a little while after. During this time, she wanted to make a pop album with songwriter Jörgen Elofsson, who wrote countless hits like Britney Spears’ “(You Drive Me) Crazy”. Kelly Clarkson’s “A Moment Like This”, and Namie Amuro’s “make it happen (feat. AFTERSCHOOL)”. The duo created their own sublabel Planet Six, a part of SonyBMG, so they could work without any disruptions. The fruit of their labor came in the spring of 2006 when Serneholt released her first solo album, “Enjoy the Ride”. The album was solid at first, reaching #9 on the Swedish charts. But, quickly vanished from the charts soon after.

Serneholt later went on to appear on Melodifestivalen, a Swedish music competition that would help to decided Sweden’s entry for Eurovision. She made her first appearance in 2009 with the song “Disconnect Me” and later in 2012 with the song “Salt & Pepper”: Although she didn’t pass the wildcard stage in 2009, Serneholt made better progress three years later when she reached the semifinals.

“Salt & Pepper” starts off very upbeat with the backup vocals, who sound like they are from Britney Spear’s songs, heralding the song’s title in a rhythm pattern full of possible eighth-notes. Marie Serneholt then joins in by singing the first verse with robust mezzo-soprano voice. While her vocals aren’t exceptional or diva-quality, they are very pleasant to the ears with a clear, crisp tone. Because of this, it’s when moments like the pre-chorus (“My hearts goes Boom-boom-boom”) and the chorus that makes the song enjoyment.The digital alternation of the voice is also adequate as they create a type of edginess in her vocals.

As for the musical side, the instrumentation doesn’t cause any inconveniences for the song or Serneholt. The song reminds me of big band music but with a modern twist. The song’s backbone comes from a firm trombone timbre that is supported by a up-stand bass and acoustic guitars. On top of those, the main instruments are an articulated tambourine with a synthesizer that goes from a 60s’ sound to a deep, electronica one.

The lyrics are  generic in the sense that the theme is too common in a lot of pop songs. But, the use of allusions is not. The song is about a girl, who might be as pure as “salt”, being attracted to a bad boy, who is characterized as “pepper”.  Spice allegories are used throughout, especially in the song, to convey the girl’s feelings for the boy. The lyrics are not as appeasing as the vocals and instrumentation as they are repetitive and really basic. Nothing really special.

This song is filled with memorable moments with it’s instrumentation, lyrics, and vocals. Even though it came in at #6 at the 2012 Melodifestivalen, “Salt & Pepper” is a notable, enjoyable song that you can listen at anytime. It might make you wanna break out into a little song and dance from time to time.